17 startup company stages between “I have an idea” and “I can buy steak again.” 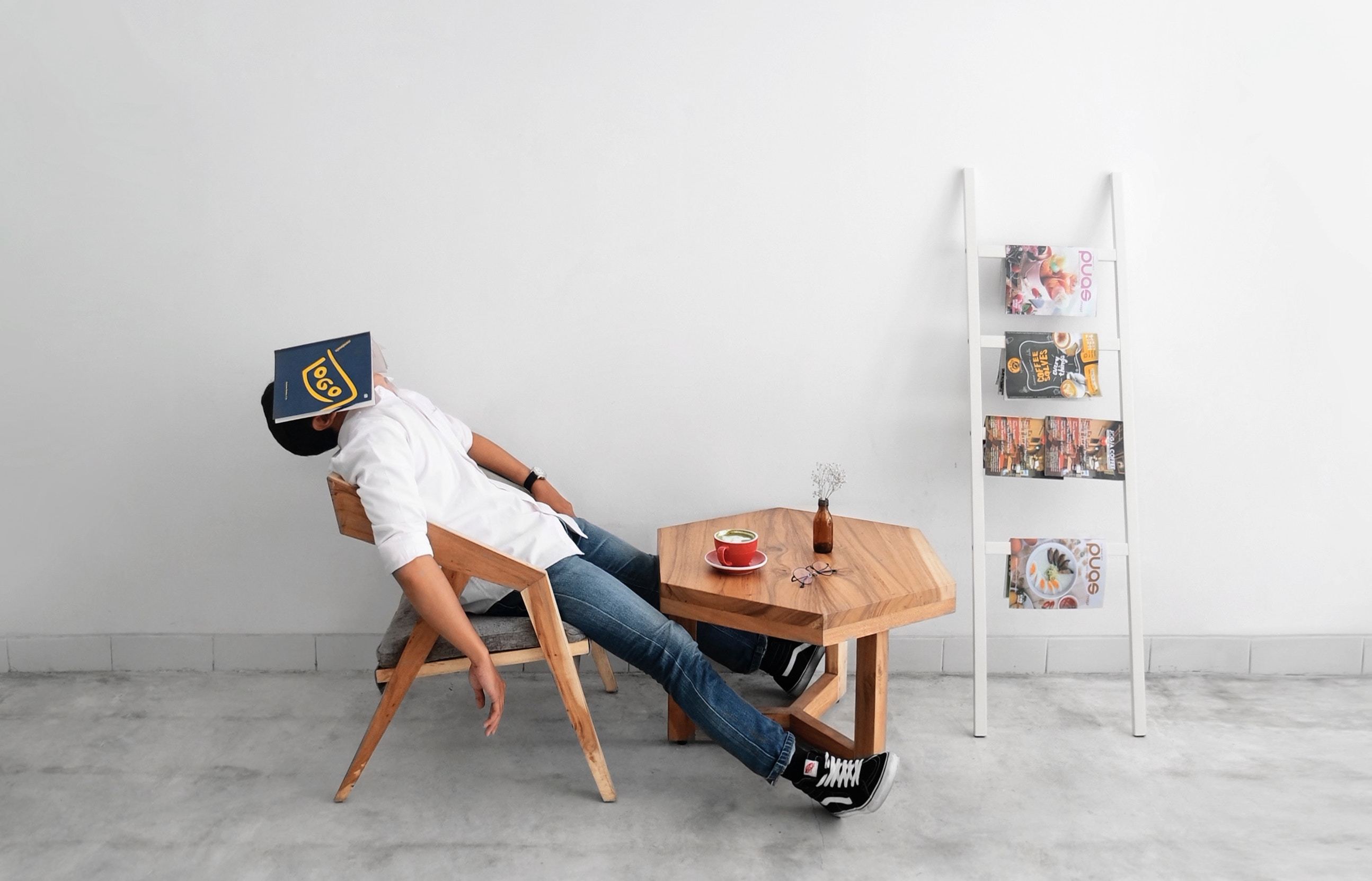 We've written a lot about MVPs and startup growth. The tough thing is, when we say "MVP" or "your startup" the reality is you're on a spectrum. There are a lot of different stages you and your startup company could be in.

Below are 17 different levels between wanting to be a founder and giving yourself your first raise. There are tens of smaller divisions we could make, but we wanted to keep things big picture so it’s easier for you to place your startup company.

Keep in mind that it's normal for a startup company to move up and down these levels. Growing your business isn't perfectly linear—that's true for everyone, including us.

0. You have the entrepreneur bug, but you're not sure what to make (or are too afraid to make it).

You want to be a business owner. You follow a ton of entrepreneurs on Twitter and think it'd be awesome to put founder beside your name one day. You really want to build something, but you're not sure what your startup company would be. Or, you’re too scared to build it.

You have one or more ideas, and you think they could be good. So good that it's pretty much all you think about at your day job. You're itching to get started, and you've told a few family members and friends-who-are-family. They didn't hate it.

After googling "idea validation," you figure you should talk to people who aren't mildly obligated to like your idea.

2. You share your idea with non-relatives. Some show interest.

Since your family didn't hate your idea, you pitch to acquaintances. You make analogies to big, existing companies and say things like, "We're the Airbnb for ____." People ask good questions and you tweak your idea based on their responses. Some seem pretty interested, which is super exciting.

3. You create a quick, no-code prototype. Like a spreadsheet.

You realize you won't get anywhere fast just talking about your idea. So you create a cheap, no-code starting point. Maybe a spreadsheet, manual solution, landing page, or email list.

We helped one of our clients, B3i, build a cutting-edge business intelligence tool for research universities. It's used by places like Yale and it started as a spreadsheet!

The prototype is to get your idea out there and see if any strangers are interested. The solution isn't built to last, but that's because it's not supposed to. It's there to (fingers crossed) get you to the next stage.

During the day, your boss calls out the far-off look that's crept into your expression.

4. The idea starts to change. You make a second version of your prototype.

A few people start using and testing your starting point (sure, you nagged them until they’d try it, but they’re still users). And you realize some things are crap. Need-to-to-be-gone asap crap. A few late nights and some extra cappuccinos later, and you have the second version of your prototype. It's still not built to last, but it's still not supposed to last.

5. People start giving you access to them. They sign up to "stay in touch" with your startup company.

Something you did is working. People give you their email address when they hit your landing page or talk with you. You sign up for Mailchimp (or similar) and begin sending updates.

You start doodling names and logos for your startup company whenever you're waiting for your office phone to ring. Lots of options that end in -ly and -ie and -io. Speedly? Boxie? Trippio? Vasio? (Don't worry; you'll get there.)

Your boss walks by and schedules a 1-on-1 to talk about why you've been so distracted lately.

6. You make money, real money, from early adopters who buy in.

Blessed are the risk-takers and your first ten customers. You're making money! Off something you made! If you could figure out how to high-five yourself, you would. (We won't tell people you tried.)

You don't have a technical version yet, but you're starting to save—or raise—money for it now that people are paying you.
And after that spicy 1-on-1 with your boss, you plan to quit your day job. Or maybe get a part-time gig. Either way, you want to focus more time and energy on your growing baby startup company. Even if it means eating a lot of ramen for a while.

7. You set your sights on a scalable, technical MVP for your startup company.

With cash in hand, you plan out your fully functional MVP. It’ll be a scalable solution that will take your idea to the next level. This feels like a big deal.

The MVP is meant to last longer than your prototype, and it’ll be the foundation of future iterations.

If you're a non-technical founder, you interview freelancers or development agencies who can do this for you.

8. Someone builds the technical MVP. It does all the things you (think) it needs to.

You scope out your MVP, plan designs, and start powering through the build.

You start thinking about things like marketing, branding, and whether you should stick with that name —Vasio?—you invented two months ago.

Family and friends ask you to talk about something other than your startup company when they feed you.

9. People use your MVP. It doesn't do all the things it needs to do, so you fix it.

Customers (and hopefully user testing) reveal big holes and room for improvement in your MVP. This really bums you out until someone points out that this feedback is a good thing. Because, hey, now you know what to improve!

You outline those improvements and start iterating on your MVP, turning it into something even better. It looks a lot like the MVP from phase 8, but it's much better at doing what customers want. They even say so themselves.

10. You quit your day job to focus on your startup company.

Customers keep using your product, and you go all in and quit your day job. Your boss isn't surprised. You're ecstatic, if a little scared.

You update your LinkedIn page (you’re a founder now!) and stock up on Ramen, rice, and black beans.

11. You realize you need a team to keep growing your startup company.

You're still earning money, and work is piling up. You think about how to extend your team. You're noticing that there's only one of you, and that makes you a massive bottleneck. To scale your startup company, you'll need more hands on deck.

You network and read up on hiring. How do you do it? Where do you even find people? Do you need a co-founder?

Meanwhile, your attention is divided between trickling revenue, needy customers, networking opportunities...surely the Advil is in your desk somewhere.

12. You build a team! And pray for more customers so you can pay them.

There's no doubt in your mind that you’re a legitimate startup company now. You just hired someone (or several someones) and it's unbelievably scary and exciting. They get to work on improving the product. You get to work praying for paying customers and defining things like time-off policy.

You're not losing money and you build up some runway. No one makes a competitive salary, which isn't ideal, but it works for now. Long days and weeks are the norm as you race against cash flow. You spend an equal amount of time worrying about building a healthy culture and getting everything done in a reasonable amount of time.

Growth seems to happen at a glacial pace, but you remind yourself that you are growing.

(A lot of startup companies that make it this far get stuck on this level.)

14. Experimenting with growth tactics and marketing to grow your startup company.

You feel close to the fabled product-market fit but it still seems out of reach. The market isn't pulling you along and you're not growing as rapidly as you want.

You track metrics, and some of it kinda works for your startup company. Most of it doesn't. How do those other guys do it?

15. You pinpoint how to grow and go from staying-alive to looming-threat in the market.

After an excruciating amount of time in phases 14-15, you identify one or two growth levers or growth cycles for your startup company. You lean resources into these and revenue climbs higher than it's been before. This creates some growing pains, but they’re the kind of pains you want to have.

You triple-check to make sure—and, yes, those are actually your margins this quarter. Your employees ask you to upgrade the coffee maker. And wouldn't it be nice to have an office space with heating?

You spend as much as 50% of your time and energy recruiting. It seems like you’re endlessly combing through networks and you wonder when it’s acceptable to hire a recruiter for your startup company.

You also become more managerial. You’re smoothing tensions between new hires and original hires, plus dealing with processes like employee onboarding. Meanwhile, you feel pulled into every other area of your business. You have a lot of conversations with fellow founders about how they handle this at their startup companies.

At some point, you realize you went from having a boss (back on level 9) to being a boss. And it's a little—okay, a lot—harder than it looked.

17. You can pay employees a competitive salary. (And people show interest in buying your startup company.)

Your margins stay healthy and even climb for several quarters in a row. You now have more than 6 months of runway in the bank, and your employees are at a competitive salary.

People even show interest in buying your startup company. They pitch things like compensation, influence, and new roles. If they had asked you back in the pits of level 13, you might’ve been quick to say yes. But now...you’re not so sure. You’re energized at this stage and you still like being a founder of a startup company. You think you’ll see what other levels you can reach for now.

After looking hard at the numbers (and your pantry), you give yourself a salary bump—and an office chair upgrade—so you can keep pushing the limits.

It's nice to have something other than Ramen in the pantry, isn’t it?

Once you reach level 17, you’re at a point where you can buy steak and non-grocery-store-brand cheese without stressing. That’s an awesome feeling.

You still have a long way to go, and your trials are far from over, but don't forget to celebrate these milestones for your startup company along the way!

We mentioned this up top, and it’s worth repeating: this isn't an exact progression. There are many more levels above where we stopped and every startup company has its own unique journey. Variables like product quality, market timing, founder personality, and many other factors will all affect the specific path your startup company takes. Please don't get discouraged if you were at level 15 but have since fallen back to level 14. That up-and-down progress is normal!

Our hope is this index gives you reason to celebrate how far you've come and some goals to shoot for in the future.

p.s. Think we skipped an obvious level? Let us know on Twitter. One of our company values is always be learning, and we'd love to learn from your experiences!