Great company culture has nothing to do with ping pong 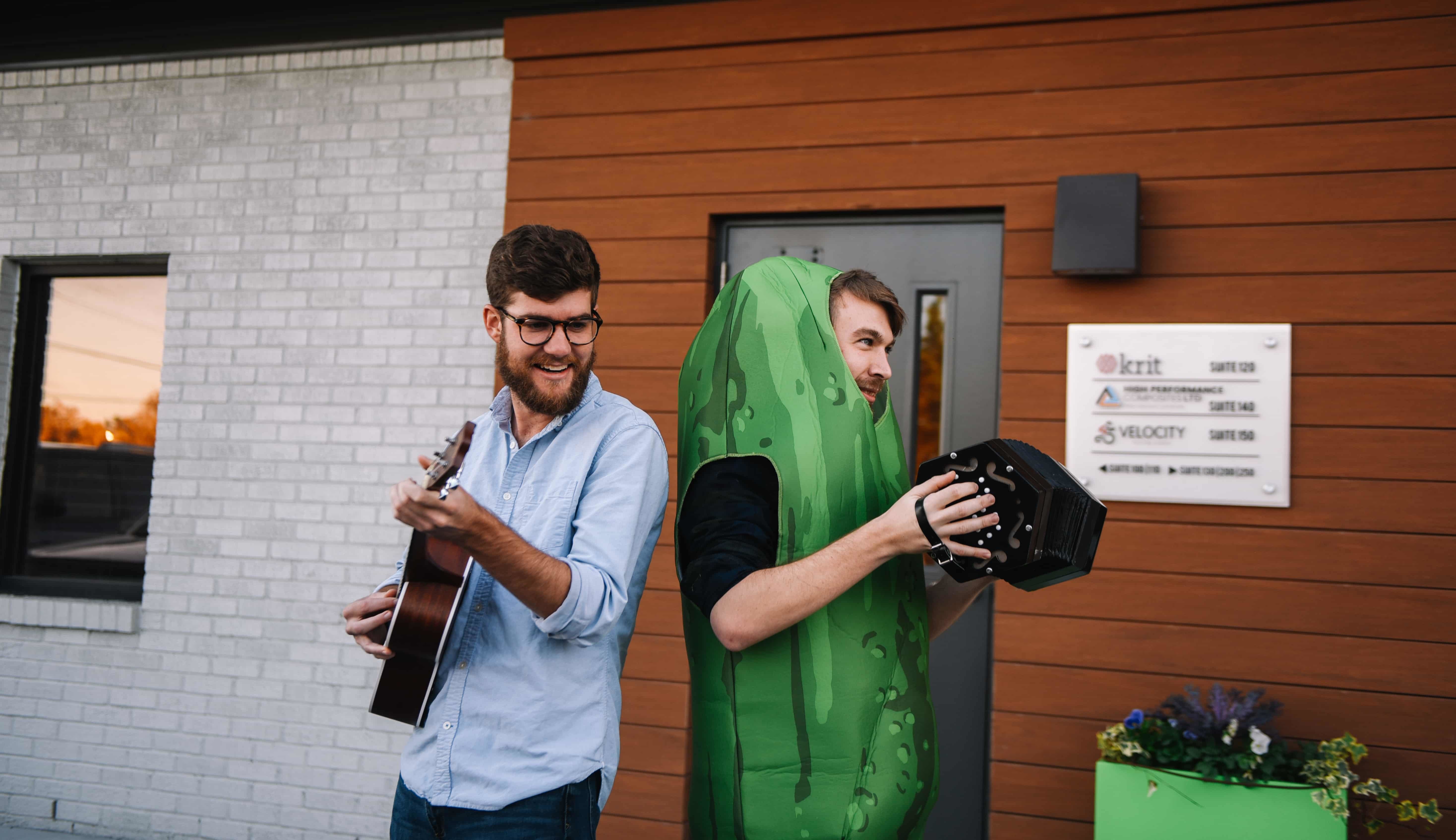 Consultants want to improve it.

Employees want to fit into it.

And CEOs want to hire for it.

But what in the world is culture, and why does it matter at your startup?

Culture is not a ping pong table

When most people think of culture, they think of artifacts. They interpret signs of culture as the culture itself. For example, they assume a ping pong table in the office means a fun startup culture. Or that an open office means a transparent culture.

Artifacts hint at culture—the startup may very well be fun or transparent. But they’re surface-level stuff. They’re not what actually defines and influences culture.

That looks like a tricked out break room to encourage downtime...but promoting folks who eat lunch at their desks and work 80 hours a week. Or plastering quotes about respect all over the walls...but sending brutal company-wide emails.

If you’ve ever been at that kind of startup, you know. The toxic, split culture severely damages the business.

Sometimes, it even destroys the startup altogether.

The good news is you can avoid this. But to make culture your startup's superpower, you have to know what it is and how to wield it.

Understanding what culture actually is

Think of various homes you’ve been in. Maybe the house you grew up in, versus a friend’s home, versus your own home (or, you know, 500 sq ft apartment). For each home, you could probably draw up a different set of “house rules.”

To come up with those rules, you’d use three types of clues:

Together, all those things make up the culture of a home, and it’s not that different in a startup. (Many thanks to Claire Lew for helping us understand this!)

Culture is an ecosystem that determines what attitudes and behaviors are okay or not okay.

The ecosystem is made up of the artifacts, explicit rules, and implicit rules we mentioned earlier:

Artifacts have the least impact on the ecosystem; implicit rules have the biggest impact.

This means if you want to figure out what a startup’s culture is really like, you have to go beyond the lobby and look at the decisions they’ve made:

If you want to shape culture as a founder, you have to lead with action.

Why does culture even matter at small startups?

“But wait!” you may be thinking, “Isn’t all this culture stuff for big companies? When you’re small, shouldn’t you focus on ‘hard’ things like revenue, customers, and metric-type stuff?”

Your company has to survive for culture to matter. But you’re planting seeds for culture now, and—whether you like it or not—you’re going to reap what you sow.

1. You already have a culture at your startup

Regardless of whether you’ve been concentrating on culture, you have one. If there are even two people on your team, there are acceptable patterns of thinking and acting. Rude jokes are either okay, or not. Bragging about weekend escapes is either fine, or not. Kindness is either a strength worth praising, or a concerning sign of weakness.

“If the CEO doesn’t set the tone for the company’s culture, someone else--or some other factor--will.” —Justin Moore, CEO of Axcient

2. Company culture compounds over time, for better or worse

If you’re sowing a bad culture, you’re in for explosions—and probably when you least need them. Mistrust, power struggles (misalignment), and stress will surface. As you scale, everything will feel harder because things, “just don’t seem to be working.”

You’ll be about as efficient as a boat trying to row itself in three different directions. And that’s assuming you even get to scaling before you and your team burn out.

On the flip side, if you’re building a strong culture, you’re equipping employees with resiliency and autonomy.

3. Employee resiliency and autonomy are superpowers

When a culture is clear and engrained, you’ll experience a “bought-in” team. Employees will be resilient to the inevitable ups and downs of a startup. Meaning, less people jump ship when things get tough.

When employees understand why and how to make decisions, they’ll also gain autonomy. They can think through how to market (“is click bait ok?”), how to sell (“what’s the cost of a ‘yes’"?), and how to manage (“can I be blunt?”). They’ll make the kind of decisions you would’ve made. Brian Chesky, co-founder of Airbnb noticed this as his startup grew: “When the culture is strong, you can trust everyone to do the right thing. People can be independent and autonomous.”

“[culture] becomes the first principles you sort of go back to when you make decisions. It becomes a way to align people on values that matter to the company. It provides a certain level of stability to fall back on.” —Alfred Lin, Partner at Sequoia Capital

Strong culture creates a recruiting funnel, boosts retention, and enables employees to generate more revenue. It can also attract investor money. (Note: This isn’t a reason to build culture, but it does indicate its value.) Companies like Airbnb and GiveForward—now a part of GoFundMe—are open about how their culture attracted investors and partnerships.

And here’s a fun stat for you: A recent Gallup poll indicated that engaged employees (a byproduct of healthy culture) can increase profitability by 21%.

Culture doesn’t work against your bottom line; it contributes to it.

How to build strong culture at a small startup

Like most things worth your time and energy as a small startup, culture isn’t easy.

Writing down values won’t make them reality, and you can’t inject employees with a syringe of “what we do around here.”

What you can do, though, is design and influence the ecosystem that powers your culture. To do that, you have to concentrate on the implicit and explicit rules that shape the ecosystem

Define what you want (and don’t want) in your culture

One reverse example for us: A friend of ours worked at a company that gave very little praise, while expecting employees to grind long hours. Multiple managers gave our friend conflicting tasks. Then, when something wasn’t done on time, they’d chew her out. Individuality was not encouraged, and employees even had to drink out of matching coffee mugs. (Weird.) Unsurprisingly, that company had a high turnover rate. But the founders just said, “it wasn’t the place for everyone.”

Your motivation behind the culture you create will have a lot to do with what it winds up looking like, and how it winds up influencing people. And since you define 80% of the culture as a founder, it’s pretty important you know what you want it to look like.

Value statements (along with mission statements) are one type of explicit rules. The problem is, a lot of statements wind up being useless sentences. Worse, they conflict with the more powerful, implicit rules that founders set by example.

The best way to combat this? Be painfully specific, and make sure your value statements reflect what you actually believe.

You risk costly misalignment if you don’t do this. Patrick Collison, co-founder of Stripe, has noticed this issue in other startups. He points out that some companies will say, “‘We believe in the importance of commitment,’ but won’t be concrete enough to say that, well, we want people who really want to pour their hearts into this for several years, and we expect this to be the singular focus of your working life.”

Be careful about who you hire, and what that says

At some point, you’re going to feel enormous pressure to fill a position. You’ll be tempted to plug in the first fit you find, so you can relieve the pain.

Especially on a smaller team, each new hire has an enormous impact on culture. Beyond that, who you hire sends a strong message to the rest of the team. Hiring someone is a form of praising them, of saying you value what they bring to the table. Your team will definitely take notes.

Instead of hiring for culture fit, which is easily abused, hire for value alignment. (See “A word of caution on ‘culture fit’” below.)

Repeat your values and mission until you’re blue in the face. Then take a deep breath, and repeat them again.

Consistency is important and so is medium; you want to repeat your most important messages in a variety of formats. Mention them in emails, meetings, announcements, pitches, and celebrations. “Culture,” says Brian Chesky, “is a thousand things, a thousand times.”

Won’t that get monotonous? Maybe.

But keep it mind that wanting to have a good culture isn’t enough to make it happen. Most companies want a good culture; the ones who actually have it work at repetition.

Model the behavior you want to see

When your team is small, you’re a proxy for an HR handbook. You determine the explicit and implicit guidelines. People look at you to see what is okay, what isn’t, and what they can get away with.

“...you’re basically setting a precedent for acceptable and expected behavior. Which means, every single negative thing you do, every bad behavior you have, you’re basically admitting that you think that’s acceptable.” —Des Traynor, Co-founder of Intercom

That may feel like a lot of pressure, but this doesn’t mean you can’t screw up. You can, and you will, make a lot of mistakes. Setting an example means you model the behavior you want to see in your employees when they screw up.

Find a few canaries to keep tabs on culture health

In the mid 1900s, miners outfitted coal mines with canary birds. The reason was simple: canaries are more sensitive to certain dangerous gases than humans. If canary birds became ill or died, miners knew to evacuate.

Toxic culture shifts are difficult to detect as a founder. So you'll need to find creative (and PETA-friendly) ways safeguard yourself.

At Krit, our canary is Culture Sprints, based on Kim Creighton’s recommendation. We focus on one core value each month and talk about that value in weekly meetings. Andrew (our fearless leader) also holds regular one-on-ones to check in on the implicit rules we’re creating.

A word of caution on “culture fit”

This phrase is easily abused, and we’ve seen it twisted into an excuse to hire a homogenous group. But background, gender, age, and race diversity is not the same thing as values diversity. The first type of diversity is immensely valuable to your team. The second type is destructive.

Hiring for culture fit means looking for background diversity while being very cautious about conflicting values.

In fact, “culture fit” probably isn’t the best phrase here. As Joelle Emerson, CEO of Paradigm, points out, “‘The word ‘fit’ almost primes us to think about ‘who is like people we already have on the team,’ beyond the specific traits we’ve articulated.”

She suggests “value alignment” as an alternative. It’s a good suggestion.

Building culture at a startup isn’t easy, but it’s worth it

Building a strong culture at a small startup is time-consuming. The founder has to be self-aware, consistent, and repeat themselves often. And those three things don’t come easily to a lot of founders (Krit’s founders included!).

But when you consider the benefits of a strong culture—retention, recruiting, funding, profit, and a healthy lifestyle—it’s difficult to justify ignoring it.

It’s even harder to ignore when you consider the costs of messing it up: wrong hires, power struggles, a toxic work environment, and decreased productivity...to name a few.

As a smart founder, you can’t afford anything less than a strong culture that propels your startup.

Just do us a favor, and don’t start with a beer keg or ping pong table.